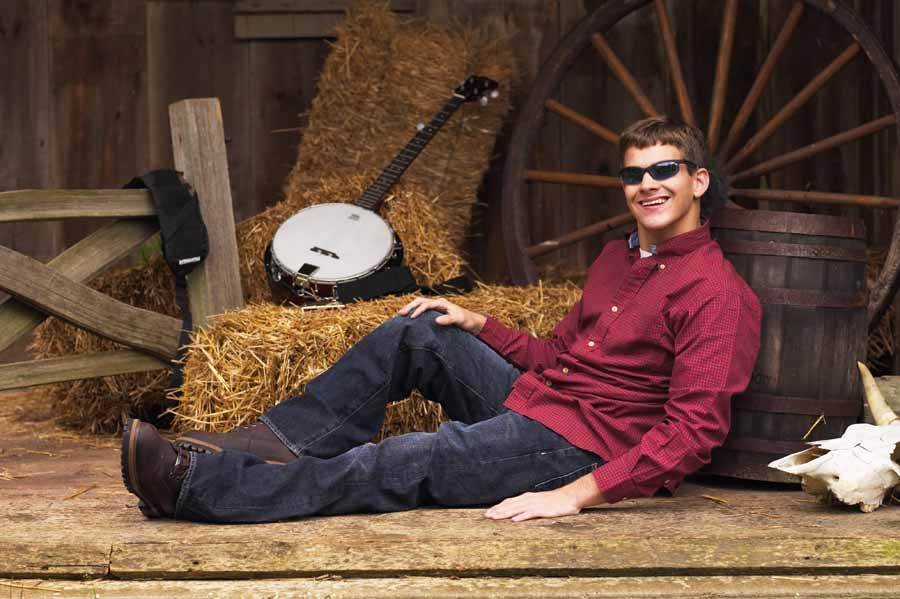 While our modern world seems increasingly fixated on the cult of celebrity and and the superficial trappings that accompany it, there is still a vital strain of music that lives on in the day-to-day lives of people everywhere who uphold and celebrate the traditions of their heritage. Nowhere is this more in evidence than along what is known as Virginia’s Crooked Road, an important music heritage trail that winds through southwest Virginia. It was into this rich heritage that Marty Leedy was born in 1969.

Marty’s father is a huge fan of the music of the region, and took his son to many festivals while Marty was growing up, including many visits to Galax. “I’ve been going to festivals for years with my dad. We would just go around and listen to songs and jams at night, and that was great fun.” Like many people exposed to this kind of music, several years ago Marty decided that listening was not enough. Although a late-comer by some standards, Marty bought a guitar and began to teach himself to play. He also began singing in church. He began bringing his guitar to festivals and local jam sessions, such as the one held at the Bluegrass Musician’s Supply Shop in Columbus, Ohio, where Marty currently resides. It was there one day that he met Tyler Williams, a young singer and musician from Marysville, about 45 minutes out of Columbus. Tyler remembers:

We knew a lot of the same songs, and our voices blended pretty good. We’re both kind of talkers, and we got to talkin. He walked in when I was about to do ‘Nine Pound Hammer’ and sang tenor with me.

Thus began the musical friendship which led to the recording of this CD.

Tyler Williams was born in 1985 in Columbus, Ohio. Exposed to bluegrass music from an early age by a musical uncle, Tyler remembers watching him pick the guitar and wanting to be able to as well. He began going to festivals and became generally obsessed with the music throughout his childhood. He began learning to play the guitar at about the age of 16, and at the ripe old age of 21 made these recordings with his friend Marty. Tyler is going to school at E.T.S.U. and is pursuing a minor in Appalachian Studies, focusing on his beloved bluegrass music. In addition to the dedication and ambition with which Tyler approaches his music, he is also inspiring in the way in which he refuses to be limited by disability. Tyler was born blind, and suffers from cerebral palsy.

Yeah, but I don’t want that gettin’ in the way of what I want to do. Let’s look past the whole blind and c.p. thing.

Enough said. Tyler has on his resume performances with such luminaries as Kenny and Amanda Smith, The Lonesome River Band, IIIrd Tyme Out, and Ronnie Bowman among others.

After their meeting in the music store, Marty received an invitation to Tyler’s high school graduation party, where they spent an enjoyable day making music together. In the summer of 2006, Marty asked Tyler if he wanted to ride to the Galax festival with him. “I said yeah, and we stayed in his dad’s camper and we ate like kings the whole time.” Both men entered the folk song competition, where they were heard by Virginia State Folklorist Jon Lohman, who heard something special in the heartfelt way the two friends sang and played, and offered to record them. Marty remembers:

Jon called the following weekend and said he had some studio time booked and wanted us to come on down. Talk about a whirlwind! That’s how I explain it –it was just a bluegrass whirlwind! In just about 10 days we went from meeting Jon at Galax to having a recording made. It’s pretty cool.

Lohman assembled a crack band of stellar musicians, including No Speed Limit’s Josh Pickett on guitar and Jacob Eller on bass, Jody King on banjo, Billy Hawks on fiddle, and the young Aaron Williams on mandolin. As the singers had not met the pickers before, songs were chosen that would be comfortable for all, such as one would hear at an informal jam session. The result is a wonderful back porch feel of the recordings. While the playing and singing is uniformly excellent, there pervades the feeling of a bunch of guys having fun above all else. This is what makes these recordings so special. Unlike the slick, often soulless records that mark much of the modern era, it is refreshing and heartening to hear two friends sing together for the simple joy of it. These recordings hearken back to a time when music was about the communion of people as much as the music itself. The songs have a freshness and vitality that one only finds when friends are making music together, as people have done for generations at Galax and other places along the Crooked Road.