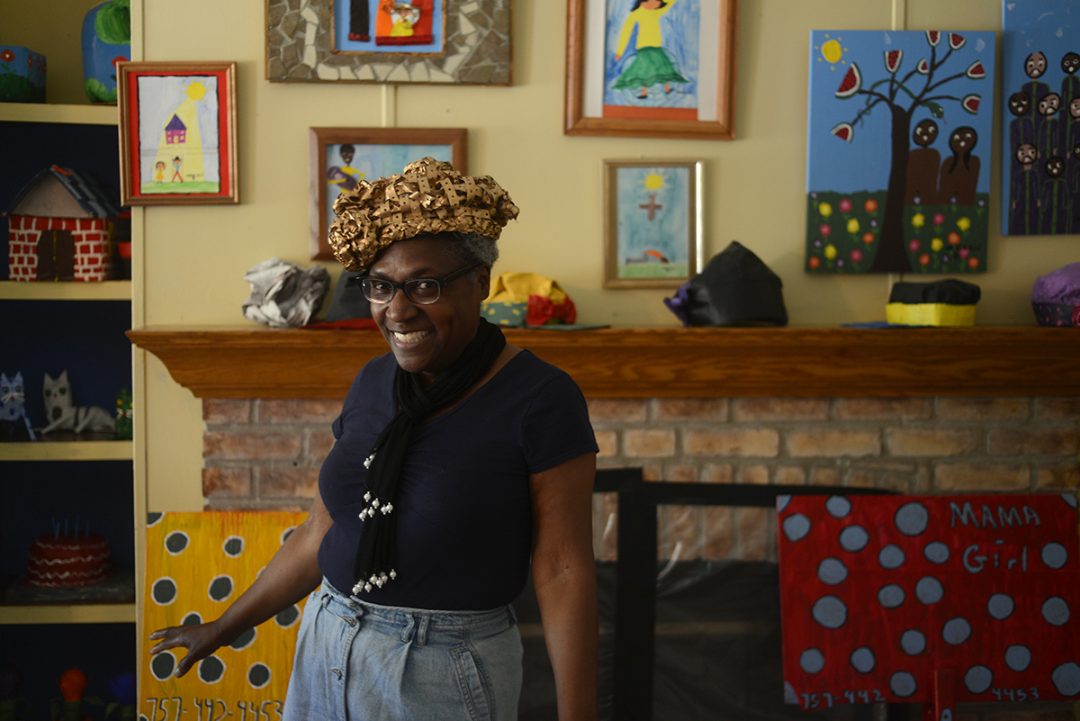 With profound sadness, we mark the passing of one of Virginia’s most beloved folk artists, Eastern Shore painter, sculptor, and pastor Mary “Mama-Girl” Onley, at age 64.

Well into adulthood before she attempted her first whimsical paper sculpture, Mama-Girl (a name bestowed by her grandmother) produced a dizzyingly prolific body of work, filling the world around her with her colorful and fanciful creations. Her muse was the voice of a spirit she had heard since childhood, during days spent picking vegetables in the fields with her parents and extended family.

“I have no idea how to make this art,” she once explained. “Really, I have no clue what I’m doing. I just do whatever the spirit tells me to do.” Often the spirit led her to create dreamlike and fanciful figures: flying green pigs, pink polka-dotted hounds, young ballerinas dancing upon a globe, or angels with watermelon slices for wings. At other times Mama-Girl was inspired by everyday moments: a young mother cradling her child, a farmer milking his cow, a group of young brothers and sisters sharing a bubble bath. But regardless of subject matter, the single most defining characteristic of Mama-Girl’s work is its joyfulness—“happy art”—as she liked to call it. Her pieces can’t help but make us smile, leaving us longing to wander further into the fantastical forest of her imagination.

Yet the magic of the art was equaled by the magic of its creator. Mama-Girl never sold her work in galleries or online, preferring to do so in person, setting up her tiny booth in arts and crafts shows and farmers’ markets across Virginia’s Eastern Shore and beyond. She was most in her element when framed by the splendor of her own colorful creations, where any divisions between the artist and her art ceased to exist. Like her beloved sculptures and painted images, Mama Girl radiated joy, amusement, wisdom, compassion, gratitude, and tenderness. She was also generous, sometimes refusing payment for a piece if she felt that the admirer was meant to have it. Many people over the years were struck by her uncanny perceptiveness—the way she always seemed to know exactly what piece caught someone’s eye, or the way she seemed to anticipate someone’s next thought. On a number of occasions I witnessed her remove a piece from display and begin to wrap it, accurately sensing that it would be chosen by a stranger arriving moments later. This foreknowledge, Mama-Girl would tell you, was also with her since childhood, and she credits the spirit for this gift as well.

The art world often defined Mama-Girl as an “outsider artist,” meaning that her work emerged not from a particular artistic community or cultural tradition, but rather from her own spiritual visions, eccentricities, and the creative depths of her mind. Much of this is true. Yet while those who were fortunate enough to have met her likely thought of her as one of the most unique and interesting people they ever had the opportunity to meet, “outsider” is probably not a word any of them would use to describe her. Mama-Girl was deeply connected to those around her—her children, grandchildren, and extended family; the tiny congregation who attended her sermons in the makeshift church she built in her art studio; the hundreds and thousands of folks across the Shore and the region who passionately supported her work; and the residents of the tiny town of Painter, who always knew that Mama-Girl Onley was someone they could count on in a time of need.

Although we often say it on these sad occasions when we must say goodbye to another dear friend and brilliant artist whom we were blessed to know and work with, Mama-Girl was truly one of a kind. There simply has never been anyone like Mama-Girl before her, and there never will be one after. Her life was a gift to us all, and she left us her vision for a loving world in the thousands of visual tales she wove from the simplest materials—newspaper, paint, glue, and the ability to listen with grace to the voices that guided her.