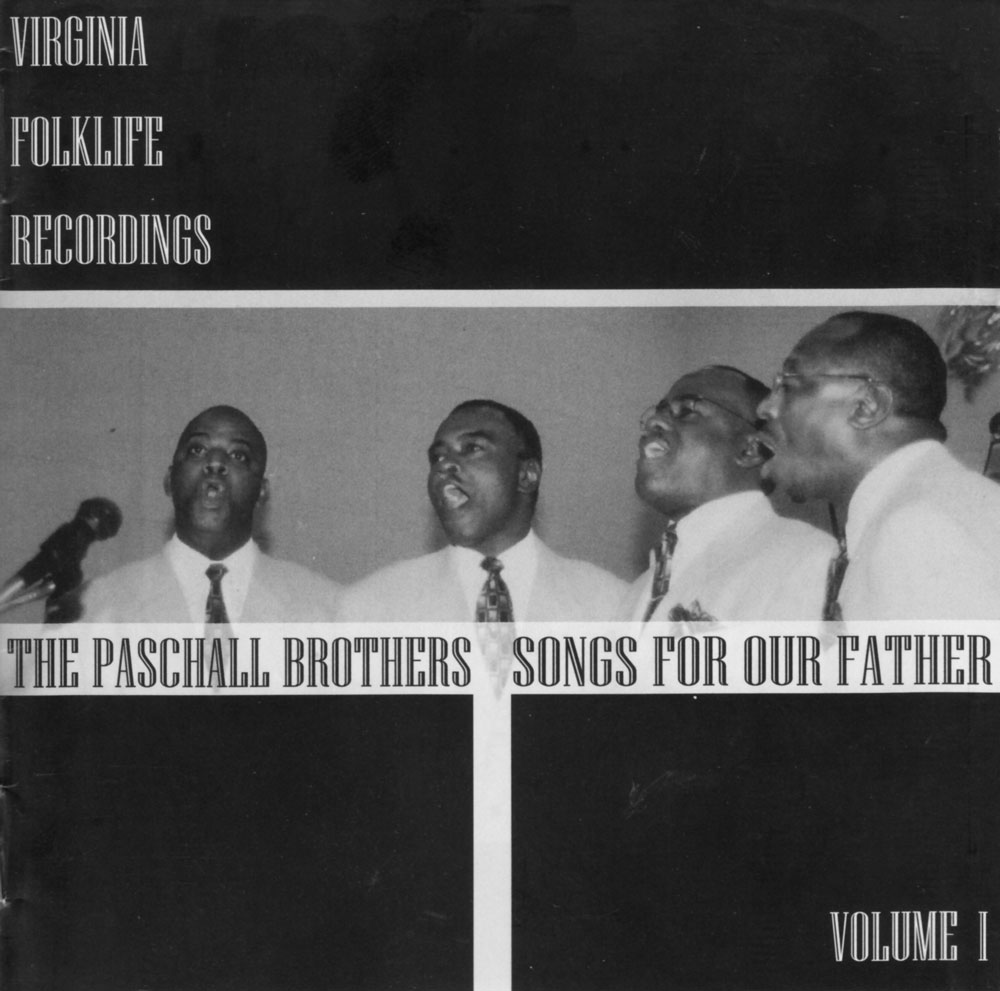 Like so many other forms of Virginia’s rich folkways, this musical tradition emerges from a particular geographical and cultural context, as it is deeply rooted in the social and spiritual life of the Tidewater’s African -American community. Yet you will find that this music also transcends its particular cultural setting, arising from a deeper impulse to create works of beauty from the simplest of means, and to express the joys of life and faith.

The Paschall Brothers are not only keeping the sounds of the past alive today. They are also passing this unique style on to future generations by participating as Master Artists in the Virginia Folklife Apprenticeship Program. The Virginia Folklife Apprenticeship Program pairs masters of a wide range of traditional art forms with apprentices for a nine-month learning experience.

It takes only a few opening notes for the artistry of the Paschalls to claim the listener’s ear. The group’s four-part a cappella vocal style is disarmingly fresh in a musical world typically drenched in instrumentation. Their lyrical message, too, speaks to straight-up religious praise. Every audience that hears them recognizes the Paschalls as distinctive. Yet one can hardly say the group stands alone, for the Paschalls have over a century of Tidewater Virginia musical traditions behind them. Decades of skilled, disciplined, and well-dressed singers helped shape an American art form and earned national recognition for the Tidewater quartet style. Nearly all of those older vocalists have passed, but they would be most proud of the Paschalls, dynamic ambassadors of Virginia’s unaccompanied gospel quartet harmony.

Though scarcely a handful of African American a cappella quartets sing in Virginia today, black four-part harmony groups were singing in Virginia at least as early as the mid-1800s. The popularity of quartet singing among black males grew rapidly. Tidewater alone produced over two hundred such groups in the century following the Civil War- an era when Newport News, Hampton, Portsmouth, Chesapeake, and Norfolk became a destination point for African Americans. Offering a combination of government and maritime jobs, Norfolk in particular developed into a vibrant black cultural center.

The history of Tidwater’s quartet scene is filled with hosts of singers. At its core the African American quartet tradition was built upon groups of four males singing bass-baritone-tenor-lead arrangements without any musical instruments. Until the mid-1930s these harmony groups sang primarily in straightforward slow or moderate tempos, and their repertoires-usually exclusively sacred-mixed tunes and lyrics from spirituals as well as from more-contemporary hymns and gospel songs.

Not surprisingly, the church was the most common context for Tidewater quartet performances, but four-part singing went far beyond the church setting. The late Rev. Frank Paschall. The founding father of the Paschalls, spoke of talented harmony groups singing recreationally on street corners when he was younger. Until the 1930s Tidewater quartets often competed in organized singing contests in which the groups were judged not only on their vocal blending but also on their articulation, appearance, and timing. Those quartets that sang jazz, the general term singers of the time used for nonreligious music, carried the quartet sound into clubs and theaters.

Performance venues for Tidewater quartets ranged widely. Groups such as the Norfolk Jazz/ Jubilee Quartet and the Southland Jubilee Singers worked the East Coast vaudeville circuit. The silver leaf Quartet of Norfolk toured as far north as Canada and as far west as North Dakota, playing venues ranging from churches to tobacco factories. The Four Pennies were discovered on a Norfolk street corner in 1934 and were soon singing to New York theater audiences. In 1922 Portsmouth’s Excelsior Quartette toured with the renowned Mamie Smith.

The American quartet scene grew dramatically in the 1920s with the advent of radio and records. Recording companies began to produce records targeted specifically at African American buyers, and numerous Tidewater quartets- the Golden Gate Quarter, the Sparkling Four Quartette, the Silver Leaf Quartet, the Golden Crown Quartet, the Norfolk Jazz/Jubilee Quartet, to name just a few- provided wonderful performances for the record market. In the 1930s Norfolk’s Golden Gate quartet, led by Willie Johnson, added a new element to the Tidewater quartet tradition, an up-tempo, vocally percussive sound that influenced many of the quartets to follow- including the Paschalls. Their “rhythm spirituals” carried the Golden Gates to stardom in major movies, on network radio broadcasts, and in concerts and clubs nationwide. Over the next two decades the group produced scores of records. In the late 1950s the Golden Gate Quartet saw their future musical market was in Europe rather than the United States, and the group moved to France.

By the time the Golden Gate Quartet left for Europe, the African American quartet tradition was losing much of its identity in Tidewater and throughout the nation. As early as the 1930s, groups were adding guitar accompaniment- a musical crutch in the eyes of some of the more conservative singers. Instruments became electrified, gospel performers and promoters booked larger halls, and musical groups began to prefer a “larger” sound than four-part a cappella singing. Gradually the norm for the gospel music scene became a lead singer backed by a chorus and/or a guitar-bass-drums-piano/organ band. The locals Tidewater quartets continued singing into the 1970s but the number of active harmony groups declined as the singers became elderly. Since the 1980s the Paschalls have stepped forward to carry the a cappella quartet sound.

Rev. Paschall, Sr., the founding father of the Paschalls, knew four-part harmony well from his own singing experiences. Born in 1923 in Henderson, North Carolina, Rev. Paschall had already performed with quartets when he moved to Tidewater Virginia in 1942 at the age of 19. Though many young singers were serving in World War II at the time, the local quartet scene was thriving in the early 1940s. A number of older quartets were still performing, the Golden Gate Quartet was riding a wave of national popularity, and the a cappella quartet format continued to be a strong force in male gospel singing even as religious groups were adding guitars and additional voices. Rev. Paschall sang in several Tidewater quartets in the following years, including the Singing Somocs and the Keys of Harmony. In 1953 his Gospel Vocalaires recorded “I’ll be Satisfied” and “Call Me Anytime,” which were released on the Gotham label.

Singing lead and training his sons, Rev. Paschall, Sr. formed the Paschalls in 1981. When Rev. Paschall, Sr. passed away in 1999, the lead vocal work shifted primarily to Tarrence Paschall, but as in many quartets the vocal parts are traded among the members for different songs. Billy Paschall primarily sings bass, often in the “pumping” style used by numerous Tidewater quartets. Frank Paschall, Jr., and Johnny Lewis trade off on tenor and baritone. Renard Freeman, Tarrence’s brother-in-law, brings to the Paschalls a smooth tenor voice reminiscent of the great Sam Cooke.

As reflected in their repertoire, the Paschalls take decades of gospel styles and songs and add their own distinct arrangements to them. Rev. Frank Paschall taught many of the older quartet numbers to his sons. Variations of “You Better Run,” “Jonah,” and “Get on Board” were recorded by groups such as Norfolk’s famous Golden Gate Quartet and the Norfolk Jubilee Quartet a half century before the Paschalls formed. The Paschall’s version of “Jezebel” is a reworked version of a performance Rev. Paschall recorded with the Gospel Vocalaires in 1953. The sweet sound of the Soul Stirrers comes forth in “Mean Old World.” “Final Edition” is based on a number by the Dixie Hummingbirds. “Rugged Cross” is an old sacred standard. Over the years members of the Paschall family have also written their won songs, including “Song for Jesus” and “Church Folk.”

With their energy, superb vocals, and dynamic adaptations of songs from various sources, the Paschalls are sure to enjoy an ever-growing audience. They are an inspiring musical beacon, taking Tidewater Virginia’s quartet artistry to new generations.

Virginia Festival of the Book

At the movies with the Virginia Film Festival

The post At the movies with the Virginia Film Festival appeared first on Virginia Festival of the Book.

There will be no big top tents or jam-packed stages, but the 2020 Richmond Folk Festival is still happening, and you can attend it along with people all across Virginia …