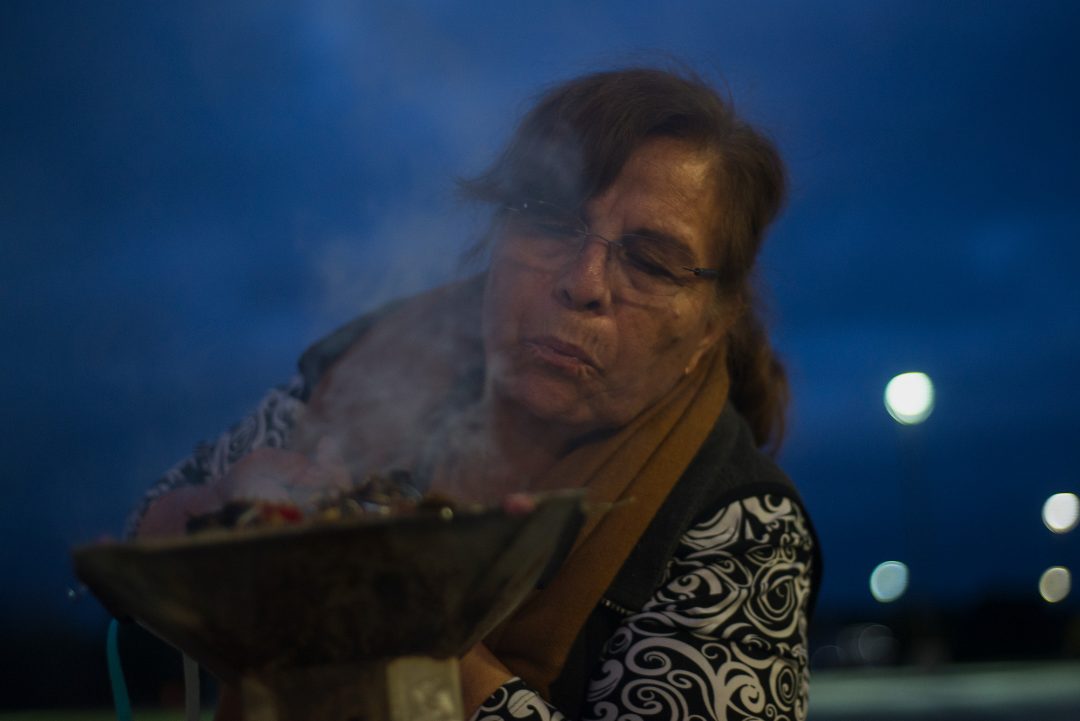 Julia Garcia performed a traditional Bolivian mesa ceremony, Mariachi Arriero and a Tradiciones Bolivianas performed before the screening of the film Harvest of Empire during a public program at Skyline Middle School in Harrisonburg on Friday, 10/13/17. Photo by Pat Jarrett/VFH Staff

In Northern Virginia, a large Bolivian community from the Valle Alto (High Valley) of Cochabamba is maintaining the spirit and customs of their native Quechua culture and language. Through the Bolivian World Network and various folklore dance groups, they organize massive Carnaval festivities, social dances, and Dia de los Muertos (Day of the Dead) ceremonies. In Cochabamba, Julia Garcia learned from her community to honor La Pachamama (Mother Earth) as the source of all life. Her mother, Vincenta Zambrana, was a very spiritual person, and after her death Julia experienced a series of unfortunate events. She reached out to a spiritual master, Don Juan, who taught her to honor La Pachamama by appreciating all living creatures and warding off evil spirits through ritual. The two main rituals in Quechua culture, the Qu’oa and the Ch’alla, must be performed together. The Qu’oa is the burning of special aromatic herbs traditionally gathered from the mountains in the spring. The Ch’alla is the sprinkling of libations such as wine, water, or Chicha, a homemade liquor produced from maize. As the smoke rises to the sky, the libations fall to the earth, creating an equilibrium respecting the duality of life. Here in Virginia, “Mama Julia” is considered an authority on Quechua traditions. She offers guidance and cultural education, and is writing a guidebook of Quechua history and traditions. She is proud to teach her apprentice, Gloria Encinas, with the understanding that these traditions will inevitably be changed by future generations living in Northern Virginia. She tells the children of her community, “we are like trees; our leaves may change but our roots do not.”