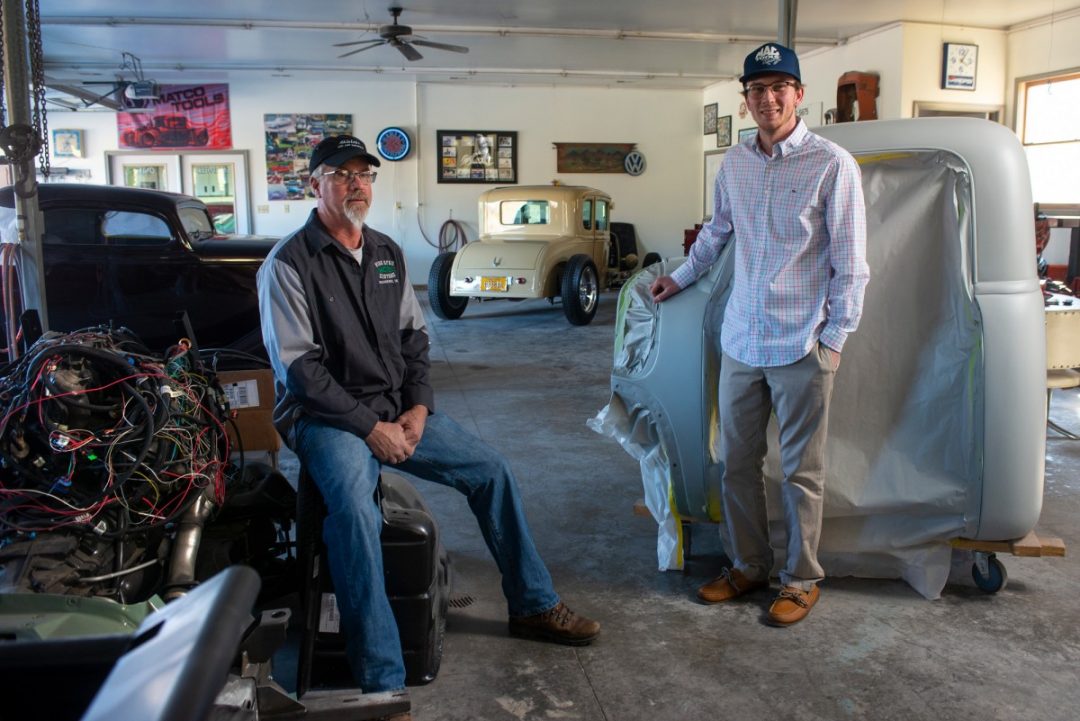 Jeff Bennett and his son Jeremy have been building hot rods together in Roanoke for years. Photos made in their shop, Wide Open Customs, on Tuesday, 3/5/19. Pat Jarrett/Virginia Humanities

Ever since the automobile went into mass production by the assembly lines of Detroit, it has been revised, altered, elaborated, and reconstructed in small garages and car shops throughout America. The historic practice of creating visually dynamic “hot rods” is particularly rich in southwestern Virginia, where many automobiles were “suped-up” as part of the bootlegging tradition, and where car clubs have been and continue to thrive as an important social outlet. “Since the early 1900s Southwest Virginia has had a love affair with fast automobiles. The stock cars racing around rural oval tracks, the dragsters roaring down small-town drag strips, the hot rods cruising through teen hangouts, the moonshine liquor cars passing through the darkness, and the muscle cars rumbling at stoplights all have a chapter in the region’s heritage,” according to the Blue Ridge Institute at Ferrum College’s exhibition “Racing and Rodding in Southwest Virginia.” Jeff Bennett, of Roanoke, Virginia, developed an early passion for cars while hanging around with his father and others who would flock to his garage on evenings and weekends to restore vintage automobiles. Jeff went on to work at his father’s shop, Perfection Auto Body, which they have operated since 1981. Jeff loves working with all kinds of automobiles, with a special affection for Ford models from the 1930s. He loves to show off his masterworks at car shows and cruise-ins, and is a member of the Star City Hot Rod Club, one of many car clubs across Virginia. Jeff will be keeping the hot rod tradition in his family, apprenticing his son Jeremy. Much like his father, Jeremy absorbed his love of hot rodding from a young age. Though still a teenager, Jeremy has already rebuilt several vintage Volkswagens, his car of choice.