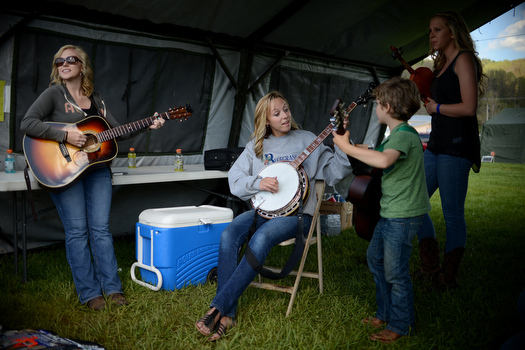 Kaden Miller practices with the Loose Strings band. Thousands visited Felt's Park for HoustonFest, a celebration of the memory of musician Houston Caldwell, in Galax on 5/3/14.
Pat Jarrett/Virginia Folklife Program

The city of Galax came alive in early May for the fourth annual Houstonfest. Born out of a community’s grief over the tragic passing of Houston Caldwell, a gifted banjoist and dedicated contributor to the civic life of Galax, Houstonfest has quietly become one of the true jewels of the Virginia festival circuit. Under gorgeous skies, the thousands who flocked to Felt’s Park were treated to stellar sets by such luminaries of bluegrass as Ralph Stanley, the Whites, Sammy Shelor and the Lonesome River Band, and many others. Ricky Skaggs, husband of Sharon White, made a surprise appearance and joined both Stanley and the Whites on stage in memorable performances.

The highlights of this year’s HoustonFest are too numerous to name, but some of them included a first-ever gathering of 3 of the 4 Steve Martin Banjo Award winners, including Virginia’s own Sammy Shelor, along with Mark Johnson, and this year’s recipient, Jens Kruger. Another highlight was the appearance of 87-year-old Stanley with his Clinch Mountain Boys. These and other shows on Ralph’s current “Farewell Tour” were touted as his last, but his grandson Nathan informed the crowd that plans have changed: “We decided that Ralph’s career won’t end until the good Lord decides it will,” he told the crowd to rousing cheers.

What sets this festival apart from so many other bluegrass festivals is its focus on young performers. Simply put, kid pickers were everywhere–on the stages, in the parking lot, and anywhere else they could jam–and their artistry was nothing short of astonishing. Several exciting youth projects, including Close Kin, Generation Bluegrass, and others, were on display, dazzling audiences young and old alike. “I’ll tell you what,” exclaimed Sharon White from the Firehouse Stage during the White’s workshop with Virginia State Folklorist Jon Lohman, “our music is in very good hands.” Many of the young performers will be assisted by the Houston Caldwell Scholarships, created by master dobro player Rob Ickes to provide funds for promising musicians to take lessons with local masters.

Listen to the entire workshop with the Whites above.

The Virginia Folklife Program was proud to be a part of Houstonfest. Houston was a dear friend of ours, gracing our stages and blessing our lives. We can’t wait ‘til next year! See more photos here.