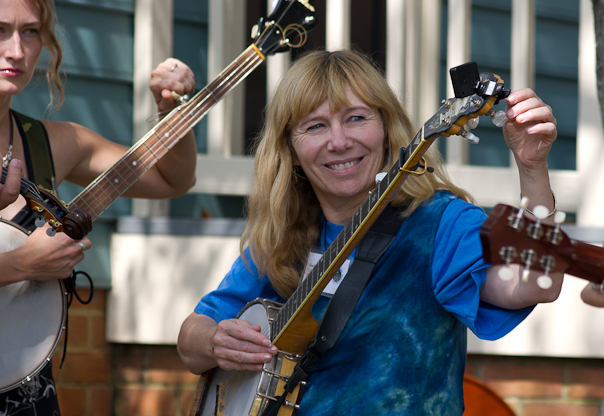 The “clawhammer” banjo style is an essential aspect of “old time,” an ensemble-based, hard-driving music form that has inspired dancers across Southern Appalachia for generations. Unlike the more popularized bluegrass style that moves the banjo into the forefront, the clawhammer technique essentially turns the banjo into a rhythm instrument, with the player’s thumbs bouncing off the short fifth string and stroking down on the others. One of the epicenters of old-time music is the small community of Whitetop, Virginia, once the home of the legendary Whitetop Music Festivals attended by Eleanor Roosevelt in the 1930s. This music has been reinvigorated by the Spencers, a family band that has entertained audiences for more than thirty-five years as the Whitetop Mountain Band. Emily Spencer, the band’s matriarch, first learned to play the banjo from local legends Jont Blevins, Lawrence Russell, and Enoch Rutherford. Emily has become a master musician herself, and is one of the most important educators in the region, directing the old-time music program at tiny Mount Rogers Combined School in Whitetop. Many students have benefited from this program, including Emily’s son Kilby and daughter Martha. Kilby, who, like his father, Thornton Spencer, has established himself as one of the fine fiddlers in the region.