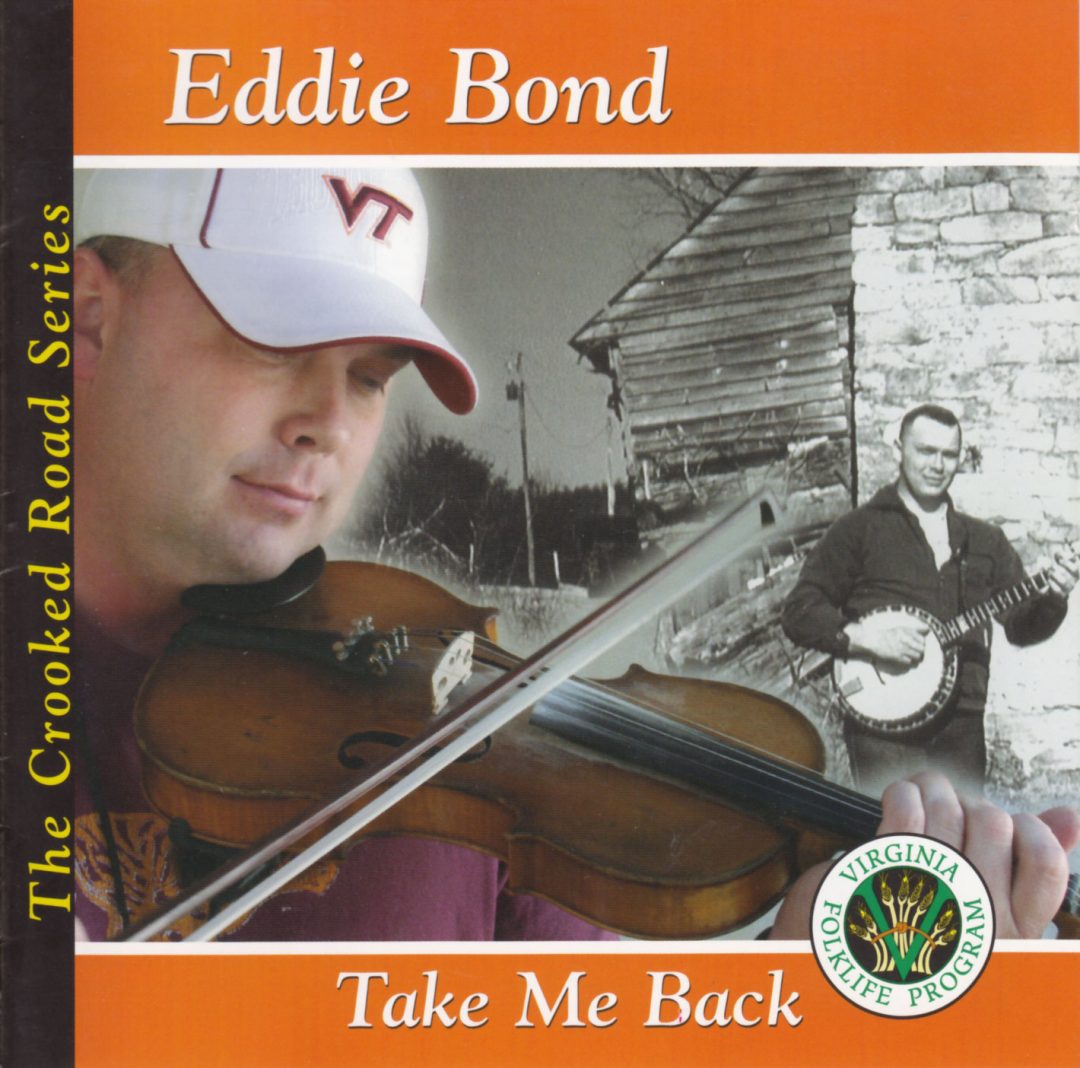 Like many other great fiddlers from this region, he is also a skilled old-time banjoist. Here the fiddle and banjo are still welded in a Virginia dance tradition that reaches back some 300 years. He also shows he has considerable skills with guitar and Autoharp.

A performer since childhood, Eddie is an avid participant in the many traditional fiddler’s conventions that enliven summers in the southwestern Virginia mountains.  Three of the best are held in his native Grayson County: in Elk Creek, Fries, and Galax.  Eddie has won top prizes, but says he has benefited most from hearing great players he has met at these events.

Eddie is the fiddler and lead singer in the Ballard’s Branch Bogtrotters, among the most respected of Virginia’s old-time string bands, and one heard often at the governor’s mansion.  But while he is a hardcore traditionalist, Eddie has other interests, and feels one best helps tradition by improving it whenever possible.

His head is crammed with hundreds of handed-down tunes, but he sometimes improvises on them, and also composes his own.  His song, Furniture Factory Blues, is based upon youthful experience, and is a fine addition to the list of Southern songs humorously telling about the travails of mill and factory work. And of course they are part of a much larger group of songs complaining about other work, the contrary nature of mules, the eating habits of the boll weevil, and more.  Eddie knows some of those songs as well.

His lovely melody, Shane’s Reel, is a tribute to his wife.  A devoted family man, Eddie loves performing for dancers, and especially the flatfooting of Shane and their daughter, Hannah.

Eddie’s devotion to family also reaches to earlier generations.  His first and most important musical influences were his Grandpa and Grandma Bond, both fine singers and guitarists.

The maternal side of his family was also musically powerful.  He spent major amounts of time with Granny Widner, who played guitar and sung in a style reminiscent of the Carter Family.

Granny Widner’s brother, Leon Hill, was a singer who headed a band called the Hillside Boys.  Eddie got his start as a performer at age 3, earning tossed quarters, dancing to the music of Great-Uncle Leon and his band, which at times included autoharpist Kilby Snow and fiddler Leake Caudill.
Clawhammer banjo playing was a tradition in both sides of the family.  Granny Widner was delighted when Eddie began playing in that style because her mother, Dora Williams, had been a banjoist.

When Eddie showed his new old-time banjo skills to Grandpa Bond, he was told that he sounded like his banjo-playing great-grandpa, Lee Bond.  Grandma Bond’s father, Coy Cox, was also a banjoist.

Eddie and his family now own and live in Grandma Widner’s house, and it still rings with tunes that Eddie played first for her.  She was the finest flatfooter in the family, yet would never dance in public. But she danced for Eddie, and his memories of her are precious.

This recording presents Eddie in the musical context in which he now lives, with good friends and family who live in Grayson County or nearby, artists he met at local fiddler’s conventions, community jam sessions, and other local gatherings.

These are also some of the musicians now making notable contributions to the traditional music of the central Blue Ridge.

Eddie’s music was also influenced by his growing up in one of the most influential musical communities in America.  That community is Fries, Virginia, a village of 600 perched on a hillside overlooking a sweeping bend and great cascade of the New River.

Terribly misnamed, the New River is in fact the oldest river in the western hemisphere, and among the oldest on earth. It confounds a conventional sense of geography by flowing north, arising on Snake Mountain on the Tennessee-North Carolina border, and flowing across Virginia and West Virginia before emptying into the Ohio River.

Built around a now disappeared cotton mill in 1905, Fries became important in the history of country music when one of its sons was the first to record a country song in 1923.  He was mill-hand Henry Whitter, and some of his songs became very popular, among them The Wreck of the Southern Old 97 and The New River Train.

But there were other musical mill-hands working in the same mill: among them Ernest Stoneman, Kelly Harrell, and John Rector (a founder of the Hill Billies). They assumed if Whitter could be recorded, they could.  By 1926 they were on ten major labels in New York, and Stoneman’s The Sinking of the Titanic was also very popular.

Great fiddler and bandleader Glen Neaves worked 38 years in the same cotton mill, and lived in one of the white mill houses perched in orderly rows above the river.  Recordings made in 1941 at the Old Fiddler’s Convention in Galax (eight miles from Fries) reveal the Neaves Band (Neaves, the Patton brothers and Raymond Swinney), as one playing what most would assume is bluegrass due to its syncopated sound.

The three-fingered banjoist in that band, Raymond Swinney, was the inspiration for Larry Richardson, Ted Lundy, and others who held to the old-time form of bluegrass often described as “the Galax sound.” Swinney was reared on a farm near Fries, and worked in the mill.

Eddie’s beloved Granny Widner also spent her entire working life in that mill.  His Grandpa Bond performed with Henry Whitter, and, much later, with Glenn Smith.

When Eddie was a child in Fries, it was also home to brilliant banjoist and country rock performer Jimmy Arnold.  Great fiddler and old-time banjoist Glenn “Pap” Smith also lived there, made recordings for Folkways, and presided over a considerable musical family.

It included his daughter, ballad singer Evelyn Farmer, and his grandson, Jesse Lovell, guitarist, singer and composer and member of the ZD Boys, a band of mill-hands. (The ZD was for zero defects, a goal of these weavers and loom fixers.) Respected ballad singer Gin Burris is Glenn Smith’s great-granddaughter.

Jesse Lovell now presides over the Thursday night jam at the Trail’s End Café in Fries, and Eddie is frequently present.  Tiny Fries is a major stop on Virginia’s Crooked Road, a heritage music trail, and visitors from many distant places come there to jam or listen.

Eddie also grew up in a musical milieu of younger players who have local
legendary players as their heroes.  These include Tommy Jarrell, Fred Cockerham, Benton Flippen, Ernest East, Rafe Brady, Otis Burris, and Kyle Creed, among others.

Eddie’s musical world is expanding; he has recently performed at the National Folk Festival, the Smithsonian’s Festival of American Folklife, in a concert for the Queen of England, and on tours to distant places. But he has no wish to become a professional, and adores his job and his co-workers who make Pepsi in Wytheville.

While there is no bluegrass on this recording, Eddie once performed in a bluegrass band.  This was in Iraq during the Desert Storm war.  Eddie was then a member of the 82nd Airborne Infantry, and occasionally treated his unit to some mountain fiddling.  His skills attracted attention, and General James H. Johnson, who was organizing what he called “The All-America Bluegrass Band”, sent for Eddie.

In this band he met Jim Greer, a bluegrass banjoist also recruited for this group organized to entertain troops and make a film.  They’d played together for a few days before Eddie rolled out a Grayson County version of “Cackling Hen.”

“Where on earth did you learn that?” Greer asked.  Eddie said he’d learned it from the late Albert Hash, founder and fiddler of the old-time group, the Whitetop Mountain Band. Greer knew the tune because he is from the Whitetop – Mt. Rogers area, Virginia’s highest mountains, and had been well acquainted with Hash. So from among the tens of thousands of troops in Iraq, General Johnson had found two musicians from opposite sides of Grayson County.
Yes, this is the same Virginia county that famed 30s, 40s and 50s collector Alan Lomax called, “America’s richest breeding ground for traditional musicians.”

It is still productive, and the swarms of kid players now part of the older fiddler’s conventions delight Eddie.

He loves a cappella singing almost as much as string band music, and here you will hear him with a family and friends group delving into a song from the Church of Christ tradition.

But mostly you will hear him with dear friends who sometimes come to visit Grandma Widner’s house in Fries to share music with its current residents.  You will hear some echoes of the past reaching toward the future, held aloft with energy and power.  Success is happiness, and Eddie and his family are very happy in Granny Widner’s house.