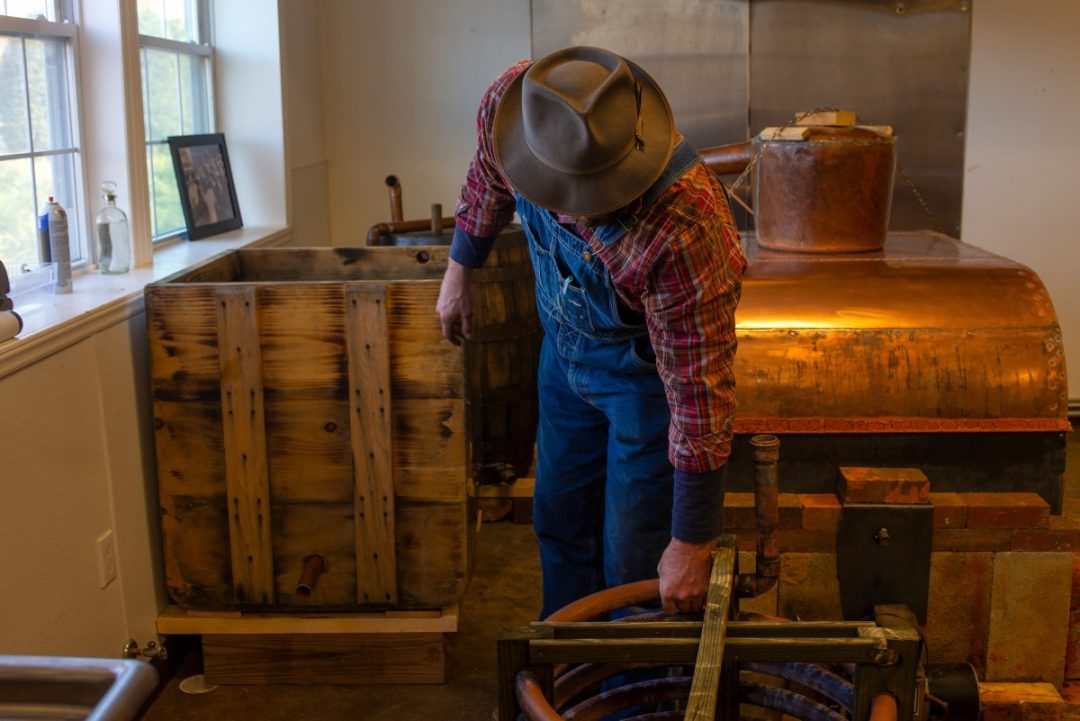 Moonshine maker Chris Prillaman learned how to make illegal moonshine from the old timers and is now going legal and building a tasting room in Rocky Mount. His apprentice Tannery Talley helped install the still at the new shop on Tuesday, 3/5/19. Pat Jarrett/Virginia Humanities

Franklin County is famous for its long history of producing and selling moonshine, or homemade liquor. Virginia colonists were distilling corn whiskey—boiling a fermented mash of milled grain and then cooling the alcoholic steam into a liquid—by 1620, just thirteen years after Jamestown was established. The continental European immigrants who settled further west in the 1700s all brought with them traditions of turning fruit into brandy and grains into whiskey. During the Prohibition era, moonshining was a booming industry in the Virginia Blue Ridge. Unlike a legal distiller, a moonshiner (also known as a bootlegger) did not license his distilling operation or pay taxes on the whiskey he produced and sold. The life of the moonshiner is often romanticized in popular culture, but the reality of the illegal whiskey trade was far from pleasant.

Distilling liquor involved hard manual labor, and penalties for operating an unlicensed still included jail time and seizure of vehicles and property. Old-time fiddler and whiskey maker Chris Prillaman was raised among prominent moonshiners in Franklin County. Among others, Chris learned from Jimmy Boyd, a 2013 Master Artist in both clawhammer banjo and “moonshine stories.” Chris’s family has longtime ties to bootlegging, and some of his ancestors were even among the 80 people indicted in “The Great Moonshine Conspiracy Trial” of 1935 for the illegal production and distribution of moonshine whiskey in Virginia. Chris and his family began the process of making legal liquor in 2014, opening up Twin Creeks Distillery now located in Henry, Virginia. It is Franklin County’s first distillery approved to legally sell moonshine since the 1920s. He will work with apprentice Tanner Talley to teach the art of moonshine making and its history.