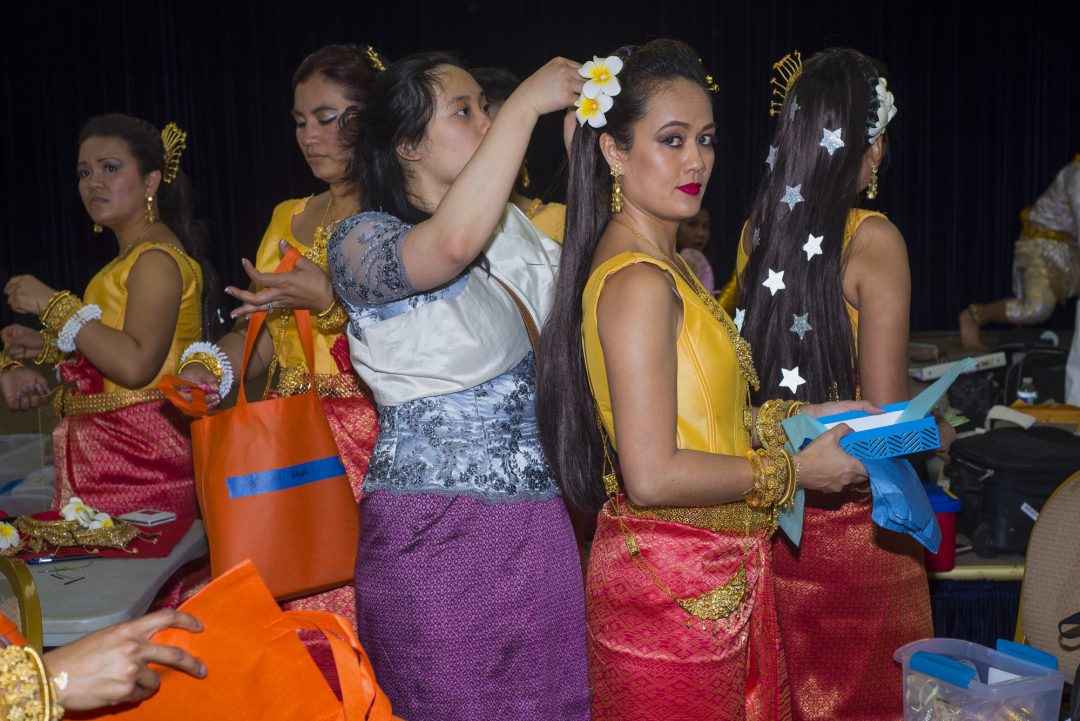 Amidst boys wearing gold bandoliers chasing each other through the lower level of the Big Temple, Sochietah Ung is the eye of the storm. His hands move quickly with gold thread to put the finishing touches on a dancer’s gold and indigo costume. Satisfied with his work on the dancer’s skirt, he lifts the small girl onto a chair to affix gold jewelry around her waist and ankles.

More dancers await their turn on either side of him. On his right are young girls in sky blue. To his left are dancers with silver stars in their black hair, waiting to transform into the night sky when they take the stage. He is on a strict timeframe and moves quickly to the next dancer. In the explosion of gold thread, flowers, jewel-toned fabric swirls, and shining jewelry, he pauses to pinch the nose of one of the dancers and tells her to smile for the camera, adopting an avuncular tone for a moment before tackling the next stitch that needs to be made.

It’s backstage at the Cambodian New Year Festival and Ung is running the show as more than forty dancers prepare to perform onstage. The annual event takes place each April at the Cambodian Buddhist Temple in Silver Spring, Maryland, featuring performances of Khmer classical dance along with folk games, traditional music, and more.

Khmer classical dance can be traced to the Angkor Empire (802-1431), in present-day Cambodia. The postures and costumes that comprise the dance have roots in the epic Ramayana as well as the images of dancers carved on ancient temples. Ornately dressed and rigorously trained dancers perform highly controlled, stylized movements accompanied by a small orchestra of tuned gongs, drums, xylophones, and oboes. The ancient dance form reached the height of its expression in this era, but continues to be practiced and appreciated widely today, both for the skilled movements and the ornate costumes of its dancers.

Perhaps the most dazzling element of the costumes are the crowns—multi-tiered spires resembling the top of Buddhist shrines that symbolize Mt. Meru, the center of the Buddhist universe. The crowns are adorned with jewels and rosettes on springs that sparkle with the slightest head movement. Wings ensconce the ears. A crescent-shaped diadem, framing the face, distinguishes female from male crowns. To construct the Khmer costumes and crowns, one must study extensively to learn the traditional techniques and symbolism behind each aesthetic choice.

However, many of those traditions were nearly lost during the Khmer Rouge genocide in Cambodia from 1975 to 1979. Scholars estimate that 90 percent of the dancers and teachers of the Royal Ballet and students and faculty at the University of Fine Arts perished during this dark period. Traditions were further uprooted as dancers and musicians who survived the genocide fled to the United States along with large numbers of their compatriots. Fortunately, some of the surviving artists were determined to keep their Cambodian cultural heritage alive in their new lives.

Sochietah Ung was one such artist. He escaped the Khmer Rouge by fleeing to refugee camps in Thailand, then making his way to Washington, D.C., in 1979. When he arrived in the U.S., he connected with a Virginia-based dance troupe led by master teachers, Phuong Phan, Moly Sam, and Sam-Ouen Tes. Ung’s grandfather had been an opera singer in Cambodia, so they asked him to help them make costumes for a Cambodian opera story. That was the beginning of his career as a Cambodian costume-, crown-, and mask-maker.

Since then, Ung’s costumes have become highly valued in both the U.S. and Cambodia, collected by aficionados around the world including Princess Norodom Buppha Devi, the premiere dancer of Cambodia’s Royal Dance Troupe. While on tour in the U.S. in 1985, she wore one of his crowns and told him, “You have fate. You were born to do this job.”

In additional to continuing to create his own work, Ung is dedicated to teaching students young and old about his costuming techniques and traditional dance. Today, a large population of Cambodian-, Thai-, and Laotian-Americans in Northern Virginia, Washington, D.C., and Maryland celebrate their culture through numerous festivals and performances. Ung’s work can often be found at these events—a swirling hemline here, an ornately glowing crown there—and he works to teach new generations about the traditions in which he was raised.

For this reason, he was selected as a Master Artist in the Virginia Folklife Apprenticeship Program, working with Lena Ouk and Matthew Regan. Together, Ung, Ouk, and Regan have spent the last year experimenting with techniques and creating costumes and crowns for a variety of performances.

At the upcoming Virginia Folklife Apprenticeship Showcase, they will exhibit some of these amazing costumes and discuss their artistic process. This free community event celebrates traditional music, food, and crafts of residents of the Commonwealth, as demonstrated by the more than twenty pairs of master artists and apprentices who will be in attendance.

Now in its fifteenth year, the Virginia Folklife Apprenticeship Program has drawn from a wide range of communities and traditional folkways to pair more than one hundred experienced master artists with dedicated apprentices for one-on-one, nine-month learning experiences, in order to help ensure that particular art forms are passed on in ways that are conscious of history and faithful to tradition. The master artists are selected from applicants in all forms of traditional, expressive culture in Virginia—from decoy carving to fiddle making, from boat building to quilt making, from country ham curing to old-time banjo playing, from African American gospel singing to Mexican folk dancing. The Folklife Apprenticeship Program helps to ensure that Virginia’s treasured folkways continue to receive new life and vibrancy, engage new learners, and reinvigorate master practitioners.

The Virginia Folklife Apprenticeship Showcase is family-friendly and will take place on Sunday, May 7 from 12:00 to 5:00pm at James Monroe’s Highland near Charlottesville. Food and drinks will be available for purchase and performances of live music and handicrafts are scheduled throughout the day on two stages. To view the full event schedule, visit VirginiaFolklife.org.