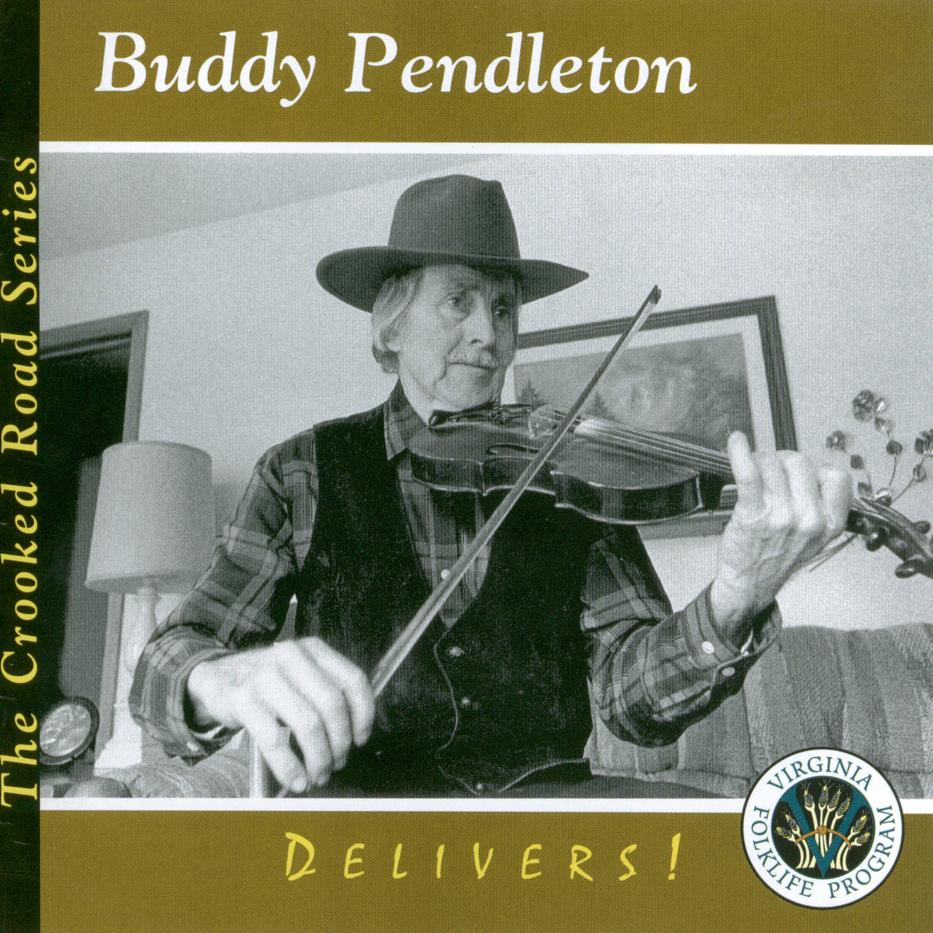 “Say Mister, What’s Your Name?”
At the eastern end of the Crooked Road lies Ferrum College’s Blue Ridge Institute.  Among their folk music archives is a scratchy 1970s recording of a bluegrass jam session at the Pulaski, Virginia Fiddler’s Convention.  On it, a fiddler walks up with case in hand and asks if he can join in.  After being invited to join, he gets his fiddle out and runs, no, blazes through a warm up scale – three octaves worth!  Instantly, all present sense something extraordinary is about to happen.  And it does, as the fiddler leads the group on a mad dash through a jaw-dropping rendition of Soldiers Joy, Liberty and Golden Slippers.  When it’s over, someone from the thoroughly stunned group says, “Say, Mister, what’s your name?”  “Pendleton, Buddy Pendleton” comes the reply in a modest unassuming tone.

Thirty years later, Buddy Pendleton is still one of the most remarkable fiddlers the southern Appalachian region has ever produced.  Fluid, extremely tasteful and innovative, Buddy’s fiddling has set a standard that has seldom been matched.  In fact, it was never matched at the World Championship Union Grove Fiddler’s contest, which he won an unprecedented five consecutive times against accomplished fiddlers from all over the United States.  A little closer to home, Buddy has also won the Galax Fiddlers Convention twice, and came in second place several times, including once after a nearly thirty year absence!

It was at Union Grove in 1960 that Buddy met and played with the Greenbriar Boys, a popular New York group of bluegrass crazed musicians who recognized Buddy’s talents.  Out of the music they shared at Union Grove came an invitation to record and perform with the band all over the northeast, including performances with folk icon Joan Baez.  When Ralph Rinzler, the Greenbriar Boys’ mandolinist later became Bill Monroe’s manager, he offered Buddy the ultimate opportunity for a bluegrass fiddler – a chance to play for Bill Monroe and his Bluegrass Boys.  Performing with Monroe and bandmates Del McCoury and Bill Keith was no doubt exhilarating, but Buddy’s tenure with Monroe would last only a few months, mostly due to Buddy’s dislike for the traveling life of a touring musician.  Buddy left the band and returned home to Patrick County, where he remains to this day, faithfully carrying the mail for the U.S. Postal Service.  Over the years numerous bands have vied for Buddy’s services, and he has performed and recorded with a large list of outstanding bands and musicians including the Lost and Found, Olen and Frances Gardner, Mayo River Boys, B.G. Express, Bluegrass Partners, Larry Richardson and Red Barker, Troy Brammer and the Virginia Partners, Buddy Pendleton and the Dixie Gentlemen, Raymond Fairchild and the Crow Brothers, Johnny & Jeanette Williams and Clearwater, Wayne Henderson, and the Highlanders.

Buddy Gary Pendleton came by his talents honestly.  In Patrick County, Virginia, the Pendleton name is synonymous with great traditional music.  Buddy was born December 9, 1935 in the Lone Ivy community.  Buddy and his 5 younger siblings enjoyed life on the family farm, a virtually idyllic setting where they could fish and swim in the Smith River, trap muskrats and pick apples.

Buddy received his first fiddle for Christmas at age 11, and soon began to participate in the weekend family music makings at his grandfather’s house.  His father, Roscoe, a sawmill owner and operator and orchard farmer, played Charlie Poole style banjo.  Buddy’s mother, Mabel, was an accomplished guitar and harmonica player.  It was his Uncle Delmar though, who played the fiddle and was the earliest major influence on Buddy’s fiddling.  Tunes in Delmar’s repertoire like Mississippi Sawyer, Soldiers Joy and Old Richmond found their way into Buddy’s repertoire as well.  By the time he was 14, Buddy had them polished up enough to compete in his first fiddle contest near Stuart, Virginia – and took home a blue ribbon!

Buddy continued to develop his music by playing at the Buffalo Ridge Pentecostal Church with his mother, by playing at frolics and square dances, and by listening to fiddlers like Tommy Jackson, Buddy Durham and Howdy Forrester on the radio or on records turned on a hand-cranked record player.  These various musical influences together shaped Buddy’s fiddling into a very smooth, melodic style that uses all four fingers on the noting hand with equal facility.  Buddy credits Uncle Delmar’s playing for this influence and it was a skill that helped Buddy master more challenging tunes he heard played by fiddlers like Howdy Forrester.

The most compelling aspect of Buddy’s fiddling is the ability to infuse his music with fire and intensity. Buddy can literally work a crowd into a frenzy when the tune is a hot one.  When Buddy competed in fiddle contests growing up, a fiddler had to be able to connect with their audience to be successful. Like the fiddlers in Stephen Vincent Benet’s “The Mountain Whippoorwill,” “Them that got the mostest claps’d win the bestest prize.” Were it not for his religious upbringing, it would also be easy to imagine Buddy as the audacious fiddler who risks his soul in an epic fiddle contest with Old Scratch himself in the popular song “The Devil Went Down to Georgia”.

Despite his many accomplishments and awards, Buddy remains modest and is still as eager as ever to hear and learn from other musicians every chance he gets.  He is also always willing to share what he has learned about fiddling. In 2003, Buddy participated as a master artist in the Folklife Apprenticeship Program through the Virginia Foundation for the Humanities, passing along his knowledge of fiddling to gifted young fiddler Montana Young.

Now, with this recording, many other aspiring fiddlers will have a chance to hear and learn some of the great music the Crooked Road region is famous for, played by one of its acknowledged masters.  As one who has been thrilled and touched by his music, I’m sure this recording will leave a lot more people with an appreciation for the extraordinary talents of Buddy Pendleton and the vital tradition he so ably represents and enriches.